It’s national CO Awareness Week 22-28 November 2021. The Guild of Master Chimney Sweeps reminds members of what they can do to improve their knowledge and raise awareness of the dangers of Carbon Monoxide poisoning.

We know you are busy – see below for our simple ‘CO Toolkit’. The videos are great for your website and social pages, the flyer is cheap and effective. Also see the good news / near miss story from the team at Avondale Chimney Sweeps and the free E-Learning Certificate package from the Gas Safe Charity.

CO is territory where professional chimney sweeps have considerable responsibility through chimney sweeping, appliance maintenance and Carbon Monoxide alarm checking. CO Awareness week is an opportunity for members to refresh their own knowledge and to improve customer awareness.

In the last 25 years solid fuel has been identified as a factor in 30% of the unintended Carbon Monoxide poisoning deaths in the U.K. that have been documented by the charity CO-Gas Safety.  We know there are likely to have been more fatal incidents than they have been able to identify.  See www.co-gassafety.co.uk/data/ for more of their published data.1

We know there are thousands of non-fatal CO incidents each year and many involve solid fuel.  Non-fatal poisonings are a serious issue as they can lead to lifelong health problems. Many incidents could have been fatal if it weren’t for either lucky circumstances or the presence of an alarm.  Figures for these near misses are impossible to quote but the Guild is investigating the use of Apps to help with information and data gathering.

As of February 2022, CO detectors become a legal requirement in all rooms containing carbon based fuel appliances in homes across Scotland. John Stone attended a consultation on behalf of the Guild in Glasgow in 2019. Building Regulations and Fire Service protocols were being reviewed as a reaction to Grenfell incident.

Our attendance helped highlight the need for CO detectors to be fitted for All combustion appliances, including Open Fires, which had been ignored until now.

1 All stats shown in this section are taken from data held and researched by independent registered charity
CO-Gas Safety and produced for this publication with their permission.

Use this toolkit to inform yourself and your customer.  Videos are free to use on your websites / social pages. 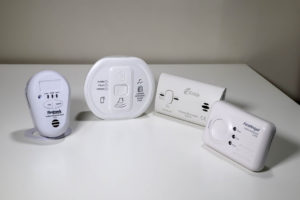 CO Canary in the Mine Video

Simple cheap and effective – leave this flyer with customers who have no alarm. Buy or print it  yourself: 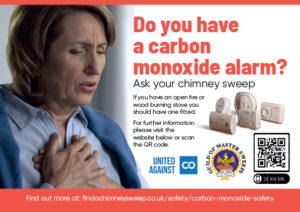 What will you do if you discover a suspected CO incident? A very useful tool to print off and carry in your van.

Stephanie Trotter, OBE, President & Director of CO-Gas Safety says: ‘We are very grateful to the Guild of Master Chimney Sweeps for this protocol which is what we consider leads good practice on how to deal with suspected CO.

Members should bear in mind that without some proof from an authoritative source, such as a member of the Guild or a Registered Gas Safe Engineer, medics tend to treat survivors, ‘as if we made up the whole thing’.

This is a quote from a young mother of a 6-week-old baby son who, along with her husband were exposed to CO in their holiday caravan. Thankfully a CO alarm saved their lives, but this attitude of their medics is sadly quite typical’.

The Charity ‘Gas Safe’ has recently been in dialogue. They have produced and made available an E Learning package, which awards a Certificate for ‘Think CO Awareness’ training, useful again to refers knowledge and for marketing purposes

The Gas Safe Charity is offering free carbon monoxide (CO) Zoom workshops this Autumn. As the days get colder and the heating is turned on, the potential risks of CO poisoning increase. The workshops last about an hour and are a mix of practical information and interaction. They are aimed at employees from any organisation that deliver their service in the home of a vulnerable person. The focus is on the sources, signs and symptoms of CO poisoning and the risks around low-level poisoning and what actions to take if you suspect this. If you would like to book a place, please click on this link: www.eventbrite.co.uk/e/115618952399 If you would be interested in our e-learning package, covering similar content then please email us on e-learning@gassafecharity.org.uk with your details and we will register you.

Paul Clements is the new Guild CO liaison Officer, welcome Paul. He recently took this course and said: ‘I have done the E Learning and found it broadened my knowledge of CO issues in a very easy way, it took about half an hour.  The pass certificate is useful promotional material, and it’s free!’ 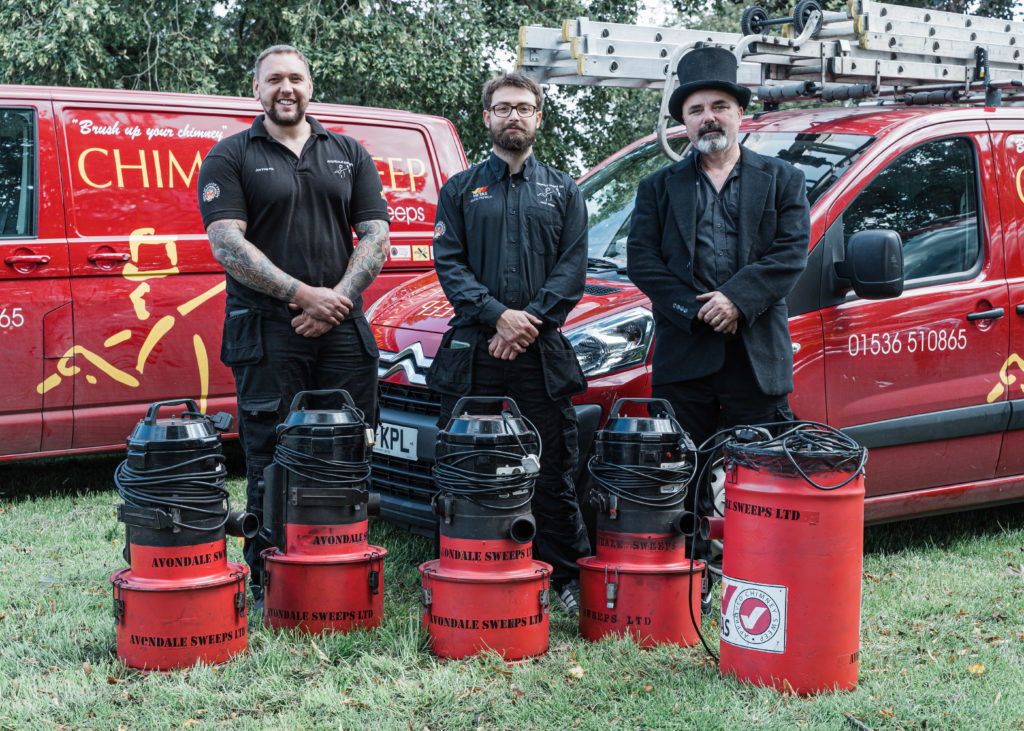 In September 2021 Russell’s team were called to a large farmhouse near Peterborough because the carbon monoxide alarms had been sounding at night on and off for a couple of days. Mr A. had fired up the kitchen range from its summer close down a couple of days beforehand and he and his wife had heard the carbon monoxide alarm sounding when they had got up in the night.

Mr A. had spent a couple of days checking the visual display of the alarm and had noted that at times it was reading up to 45 ppm CO and when they came down in the morning and opened doors and windows it returned to 0 soon after.

Mr A. called the chimney sweeps in after consulting with the boiler engineer, as he initially suspected it was his boiler causing the problem.

Joe Pearson and Jake Patrick from Avondale saw that there was an oil-fired Aga kitchen range, venting into an unlined brick flue in a fairly large open plan kitchen with a utility room to the rear of the appliance with no doors to the utility space. There was a sweeping access hatch in the breast, above the Aga, and a vent above this hatch. They noted soot marks around the top of the stove pipe as it met the closure plate, soot marks like this can be an indicator of leakage.

There was also an oil-fired boiler in an adjoining room directly to the rear of the Aga, this one installed with a liner sharing the same chimney stack.

Joe and Jake decided to inspect the range flue through the hatch prior to sweeping it and thankfully for them it was a good decision. They found live wasps in the flue.  A subsequent CCTV and drone exam revealed that there was a large wasp’s nest in the brick flue, causing blockage.

It was later discovered when swept (after pest control had visited) that it was originally a bee’s nest that had been invaded by wasps.

Interestingly, the Carbon monoxide alarm was not in the correct proximity to serve the kitchen range but still gave good warning as it was in the utility area, quite close to the oil boiler.

Mr A. had installed the alarm five or six years ago, but before that there had been no alarm. The Aga chimney had not been swept in 20 years.

Mr A. said  “I didn’t realise the seriousness of it”

Without the presence of a functioning Carbon Monoxide alarm, this situation would have continued unnoticed and potentially escalated into serious consequence for the house occupants. 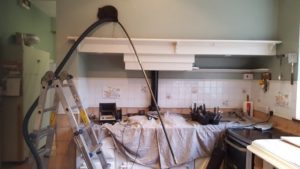 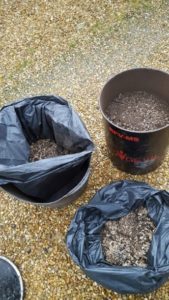 Showing the nesting materials once removed