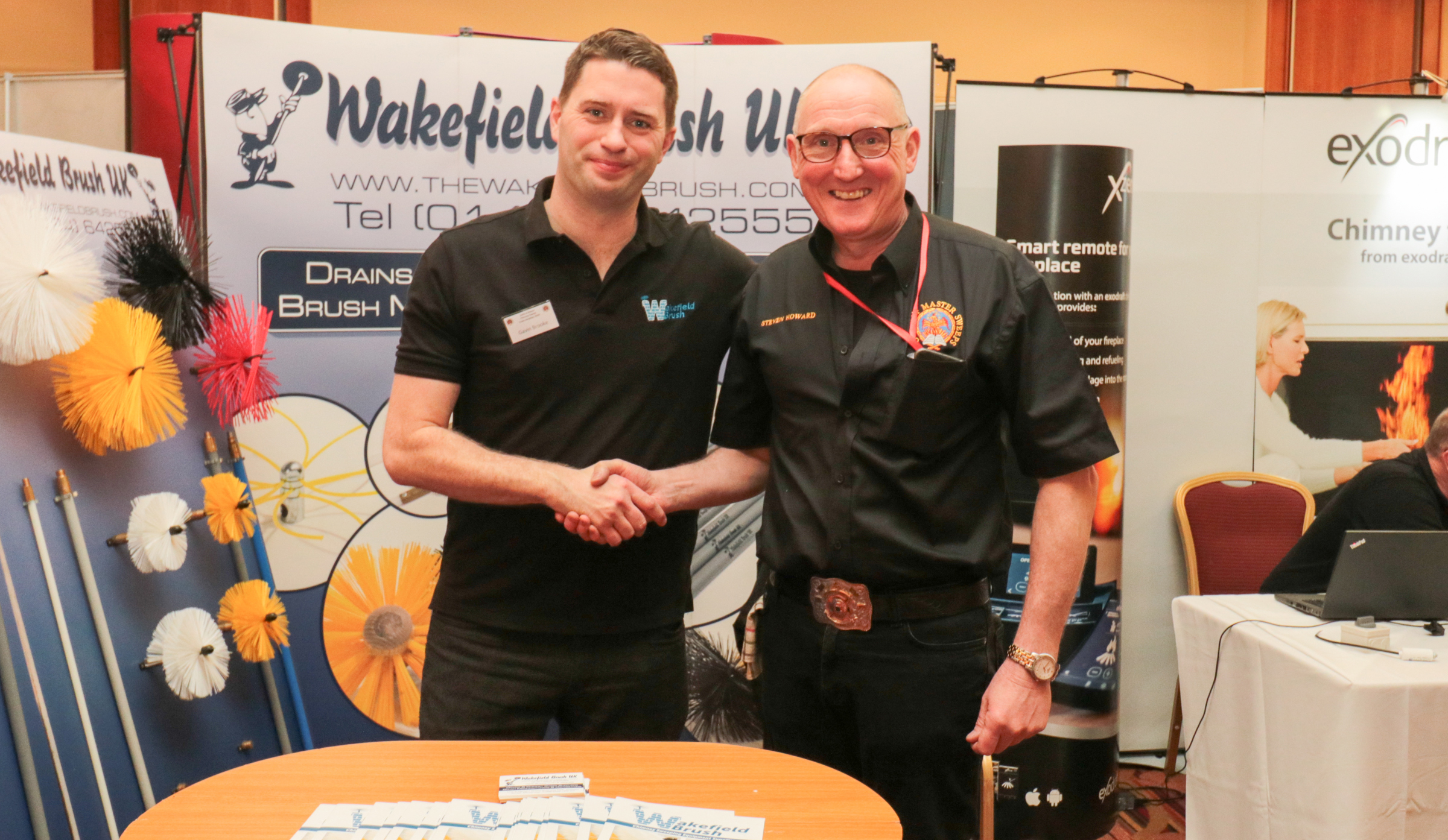 On February 28/29, the Chesford Grange, Kenilworth again hosted the 2020 Guild Exhibition. This event was kindly sponsored by Rodtech UK, and as well as welcoming Guild members, stove / fireplace installers, and other trades, the Exhibition attracted many chimney sweeps from all the industry associations making for a fantastic couple of days with over 500 visitors passing through the doors. As usual there was lots of chimney chat amongst friends and colleagues who often only get to meet up at our event once a year.

34 trade stands attended this year’s show and it was clear from the doors opening at 10.00am on Friday morning it was going to be a busy couple of days which proved to be the case. Everything was in place for another successful Exhibition. The hotel staff had certainly proved very attentive in assisting with the setting up, and the continuous buffet food during the weekend was greatly received.

Often is the case that many of us on duty miss out on the great show offers available, simply due to the enormity of the event and the footfall, but this year we all managed to make time to get to see the exhibitors and have a chat, buy some of great new kit on offer and generally have a good catch up and the odd photograph taken.

Late afternoon on Friday, many visitors arrived who were staying over at the hotel and attending the show on the Saturday, allowing many to meet up in the bar and local restaurants, something which seems to get more popular year on year!

Shortly after the Exhibition Hall opened on Saturday morning, the first of the three seminars got underway in a separate area.

John Dyson of Exodraft was up first with a presentation on everything to do with cleaning and maintenance of chimney fans.

BurnRight for Business followed soon after. This was a seminar on how to increase repeat and generate new business and was presented by BurnRight co-founder and Guild member David Sudworth.

The third seminar was presented by Mr James Roy Archer of Clock Stoves. Covering Eco Design Stoves 2022 and the facts customers will want to know about the industry changes.

All three seminars were extremely well attended and well received given the general feedback. Many thanks to John, David and James for their expertise and knowledge.

The weather was much better on Saturday, meaning we had a great turnout for the Van of the Year Competition. This competition was open to anyone, not just Guild members. Emma Roddy, last year’s winner oversaw the proceedings, and amongst some very stiff competition, Emma eventually judged the best van for 2020 was Glenn Howat. Receiving a cheque for £250 and the winner’s trophy, Glenn commented “I am absolutely thrilled, proud and delighted that my van has been awarded the first prize. This is the first time I have won this award and I never miss the Guild Exhibition. This is a great achievement for my business”. Well done to Glenn, and David O’Donnell who was awarded second prize

As Saturday afternoon ended, around 140 had a group photograph taken ahead of the AGM which commenced at 3.30 pm. It had again proven to be a very busy day for the exhibitors. By 5.00 pm the Exhibition hall had been cleared and we said our farewells and extended our thanks to all those who were heading back home for their support of the Guild Exhibition and for the industry. Without this support, we could not put on such a great event.

Some exhibitors stayed over for the Saturday night gala dinner, disco and charity raffle. We had 130 guests including families, members and partners and chimney sweeps from the other sweeping associations join us for the 3-course meal. It is very humbling to see so many attend our grand finale to the weekend. It was great to have Ryan Metters, Chairman of APICS, and Mr Bob Russell former Guild chairman and his wife Gina at the gala dinner.

The generosity of those who attended over the weekend and at the gala dinner meant the Guild were able to donate a cheque for £2,150 to our main nominated charity being CO-Gas Safety who this year celebrate their 25th anniversary. President of CO-Gas Safety Stephanie Trotter OBE received a cheque from Lawson Wight and extended her sincere gratitude in all that the Guild has done for carbon monoxide awareness over many years.

The Guild could not raise this money without the generosity of our exhibitors, members and others who very kindly donate raffle prizes. Many thanks to everyone who made this possible. We were fortunate again this year to secure a donation of a multi-fuel stove as the main prize. This was kindly donated by Clock Stoves and James Roy Archer.

As the night ended, that left everyone time to get to the dance floor and enjoy the disco. It seemed some certainly did just that.

I would personally like to extend my thanks to Lawson Wight for assisting me with getting the show organised and his dedication and commitment to the Guild especially since taking over the role as Chairman and steering the association forward. Thanks to Dave and Nina at the Guild office for making sure the show goes ahead with precision. To my fellow directors for their support in all aspects of what we do.  And thanks again to our 2020 sponsors Rodtech UK.