Chimney sweeping is a job that can take you to unusual places and it can be shaped around our lives. Guild member Ross Venning tells the story of his journey to become a sweep and the new and unexpected world it has opened up. He’s already working at height before setting foot on ladder! 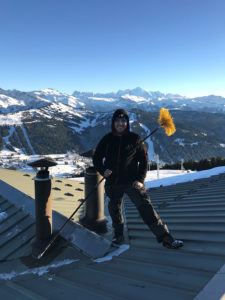 Hey, I’m Ross Venning. I am 38 and in live in the French Alps with my wife of 15 years Sarah and my two girls Lucia and Safiya. Sarah and I met aged 19 back in 2002 in Fowey, Cornwall. We both worked in local pubs, Sarah was at college and I was running the family nursing home in Falmouth.

In 2005 we sold the nursing home. My parents were looking to retire early and buy a little ski chalet in the French Alps. It could be run over the winter and cover the bills for the year. Looking for a property around Les Gets, dad asked a friend who lived there,’what happened to that beautiful restaurant on Mont Chery?’. When I was little we had eaten at this restaurant. Sadly it had been closed for 15 years, but it was now for sale…

So, In 2006 I moved to Les Gets with my family and bought the restaurant at the top of Mont Chery, overlooking Mont Blanc.

The first 12 months we renovated the restaurant, doing nearly all the work ourselves. As parts of the restaurant became ready for business, we opened them from December to March. From April to November, we carried on with the renovation every day. You could have your birthday and Christmas day off. By 2012 weíd finished as much as we could. My wife worked in a local restaurant and I took what ever came along.

We had a house in Lincoln which we rented out and just covered the mortgage, but it became too much trouble as we were so far away and it also needed a lot of work, so we sold in March 2017. We got a tiny bit of money out of it and I told my wife ‘I am going to train as a chimney sweep’.

At first, she was quite surprised, but I said I had thought about it a lot. We live in the mountains where nearly every chalet has a chimney. We would also have a niche market as there are lots of English-speaking people here that donít speak French, so I thought there was a good customer base.

I never thought after my training with the Guild that sweeping would quickly turn into a passion and something that I love doing. I get up in the morning and look forward to going to work. My friends have stopped asking me howís work going? They know that the phone will come out and all my latest pictures of various types of soot and bad installations, yes, we get them here too! 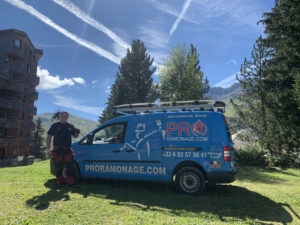 Four years later and some of my enthusiasm must have rubbed off on my wife as she is training to be a chimney sweep with the Confederation des Ramoneurs Savoyards. Itís a six-month training course alternating between two weeks at college and two weeks at work. Sarah and I work very well together, and we love it. When it comes to teaching her things however, she doesnít listen to me. Luckily for us the neighboring chimney sweep company very kindly took her on to tutor her. Itís great when she comes home excited about the things she seen and learnt and the roofs she has been on. I am even jealous somedays of the type of work.

Loo rolls are van essential for a mountain chimney sweep. A lot of properties are rented, and never seem to have loo roll. When nature calls itís a mad panic to A. check the waters on, B. if itís not, find the stop cock and C. run to the van and find the loo roll. Lastly, donít forget to turn the water off again or the pipes could freeze. It sounds like I use the loo in every house but these are just precautions for when you get caught short.

Some places are remote, the water has not been used for months and is undrinkable so plenty of bottled water is good. A chalet díalpage is a property high up in the mountains and off grid. In such cases I need a power pack for my hoover. The only way to get to some customers is by Skidoo or quad bike! Some towns are pedestrianized so we have to be driven around on a skidoo all day.

We all have a ëworst momentí story. One of my worst days was with a new customer. I set myself up and the family disappeared outside to have lunch in the garden. A quick look up the chimney and all looks ok. Rods in and Iím thinking I must be at the top by now. I hit something that feels spongy, so go outside expecting to see my brushÖnothing there. I go back and give the rods a good push and hear the ëdingí as the brush hits the ëtop hatí. Perfect. I was about to go out to look when I hear screaming, and the family came racing back into the house. A waspís nest the size of a football had fallen and landed smack in the middle of their table. I must have apologized about a thousand times. Everyone was ok and we all had a laugh about it in the end. 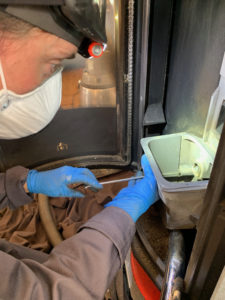 Even though itís a different country, we still get the same old problems: Customers who try to light the fire with a few scrunched-up sheets of newspaper and a log. People who havenít swept their chimney for 10 years because they didnít know you had to. Some who donít burn a m2 of wood a year but always shut it down too early. I explain every year, but it never changes. Or the customers who argue about how the fire works and wonít listen to the qualified chimney sweep!

Itís a difficult time with covid but itís also very exciting business wise. Because we couldnít open our restaurant, I have taken the plunge and started a second business with Sarah. Weíve bought a 7m Airstream Foodtruck to open in June, selling ñ fish and chips. Unlike the UK our chimney sweeping is quiet in the winter and this gives us something else to do.

P.S. My training with the Guild did get me into a bit of bother. I Promised Dave Wooffindin that I would bring him some of Sarahís homemade marshmallows when I returned to complete my assessment. To stop them from sticking theyíre coated in corn-flour and icing-sugar mix. At the airport I got pulled over. The tub had opened and when they unzipped my bag, a big plume of white powder came out. The rubber gloves went on very quickly. It took a while but, they finally let me through.

You can see all the details of Sarah and Rossís fantastic restaurant here: