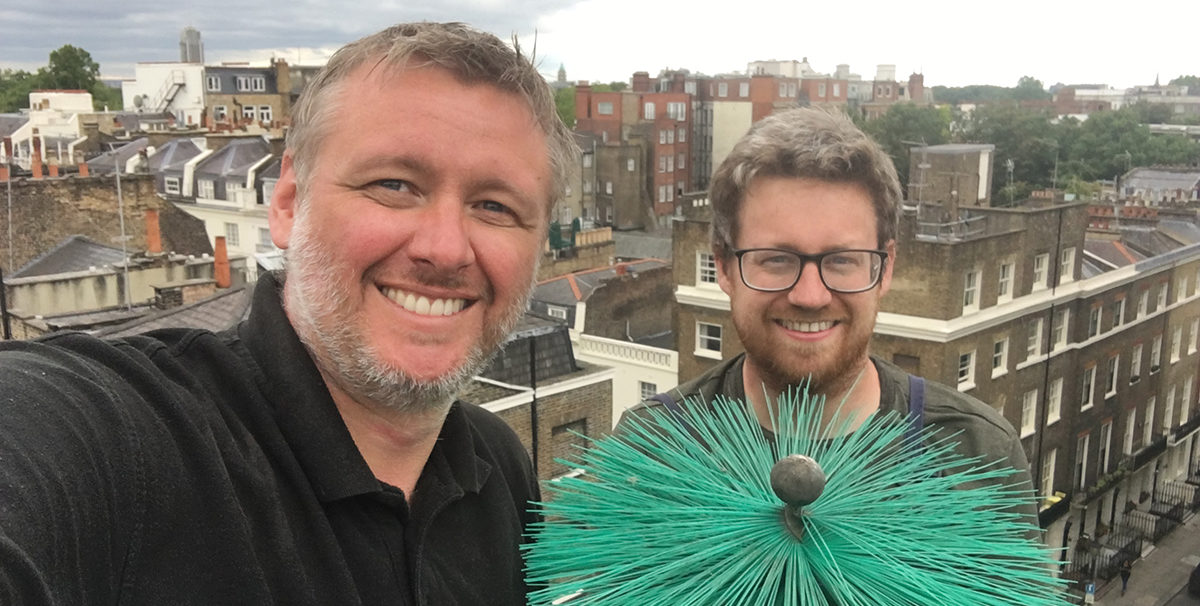 This article was first published in ‘Sweep Stuff’ magazine – Dec 2020.

There’s an old saying that ‘once you pass your driving test, you then start learning to drive.’ The same can be said for sweeping.

No amount of theory and classroom-based training can truly replicate the real-life experience of being out there in a customer’s home. Of course, being a pretty solitary profession, it’s easy to fall into habits, with no-one there to give another point of view.

That’s why I always relish my annual “Sweep Swap”. Once a year, I shadow another sweep in a different part of the country. In 2018. I spent the day with Ian Welford, of Chimney Sweeps North East in Newcastle. Last year I headed to London for a few days with Paul Solicari, of SweepSmart.

This year I went back to London to shadow one of the UK’s oldest sweeping firms.

H Firkins & Sons have been cleaning flues in London since 1860. Queen Victoria was on the throne, Charles Dickens published Great Expectations and the first ever fish and chip shops opened their doors.

Although a lot has changed in the intervening 160 years, and I was keen to hear how Firkins have adapted to those changes.

Josh started training with his dad Graham 15 years ago, and in that time they’ve cleaned, tested and inspected chimneys the length and breadth of our nation’s capital city.

On the first day, we were primarily around the Firkinsí ëhomeí patch of North London, including New Southgate and Stoke Newington. Most active chimneys in London seem to be unlined, so Josh does a large amount of traditional, manual sweeping.

The one thing I noticed pretty much straight away as well is that most chimney pots in London are open. Josh tells me this is a mixture of some of them being difficult to access and, unlike many other areas of the country, bird nests are extremely rare in London.

The cream ‘buff’ pots are typical fayre in London and, as a sweep, it’s one of the city’s most striking features.

As many people were still working from home as a result of Covid-19, the traffic is a little lighter than normal ñ making it easier to get to appointments in a timely manner.

Indeed, on some occasions we were running ahead of ourselves, which is a bonus because as any sweep will know, some jobs can take longer than others.

Open fires are also very prevalent in London and we sweep a fair few of them during the course of a day.

The way Josh ‘sheets up’ the fireplace is different to me. He uses bamboo rods and Bailey rods to keep the sheet in place. It took a bit of getting used to when sweeping a flue with these in place, but after a bit of gentle tutelage from my guide, I managed to get the hang of it. I can see the benefits and itís another ëtrickí which Iíve got in my sweeps toolbox now!

Day two and we begin with an unlined stove before moving on to an open solid fuel fire and an open gas fire just a few miles away.

By now Iím starting to really appreciate just how efficient Josh is. Obviously, having done it for over 15 years, heís got into a way of doing things which gets the job done in a professional but prompt manner. This certainly suits customers, many of who can be pressed for time (it is 2020 after all and the curse of the Zoom meeting looms large in almost everyone home!).

After cleaning a stove in a basement flat in Stamford Hill, we head to a grand four storey property (five if you count the basement) in Islington. I take a deep intake of breath as we park up and assess the height of the flues.

As someone whose area is generally full of chimneys which are rarely more than 36ft in length, the sight of some reaching 50ft made me wonder whether we northerners had got it all wrong regarding our ësouthern softiesí put-downs!

We sweep two open fires; one on the ground floor and another on the first floor. And to be honest they actually felt easier than some flues in my area.

‘The taller they are, the more straight they can be,’ explains Josh.

‘It’s not always the case 100% of the time. Some can be very bendy, but these are quite straight. The hardest bit on tall, straighter flue can sometimes be centralising the brush to get it out the top. Because at height, the rods start bending and sometimes you have to come back down a bit and then go back up.’

For our final appointment, Josh and I are heading into Marble Arch to perform a sweep and leakage test on a chimney. This is in an apartment with roof access, and the views are absolutely fantastic.

Way above the streets, you can see all the chimney pots crammed in next to each other. Once upon a time, these pots would have been belching smoke out 24/7. Undoubtedly they will have contributed to the Great Smog of London in 1952.

This five-day ‘pea souper’ apparently killed 4,000 people with a further 100,000 suffering breathing difficulties. Events such as this eventually ushered in the creation of Smoke Control Areas, which are still in place today.

Heading back home, I reflected on my time in London and what I actually learnt. In a solitary profession such as sweeping, itís really easy to fall into ways of doing things, either through your own preferences or influences from elsewhere.

It also really made me appreciate my Guild training more. When I trained, it was all about manual sweeping – and thatís what I was assessed on as well. Like many sweeps, I eventually purchased rotary sweeping equipment and starting using that more often than not. But what Iíve figured now is that actually that solid underpinning knowledge of how to sweep manually has stood me in good stead. So Iíve kind of gone a full 360 degrees by going back to manual for about 95% of my jobs.

Spending time Josh, who sweeps manually pretty much all the time, helped me realise that I had skills which I wasn’t using because I’d sort of ‘forgotten’ about them. Or rather I didnít realise how valuable they were.

That’s why I think itís important for my continued professional development that I shadow other sweeps, swap hints and tips, learn new things and solidify my knowledge. But there are other reasons.

London itself is culturally not that different to my area around Manchester these days. Indeed, there are a lot of people from the south who have moved to the North West for university or work. Media City at Salford has been a big plus for the area and it has brought in many young professionals.

Without being trite, it’s not hard to understand that what happens in a nation’s capital can eventually percolate to other areas in one form or another. So my visit was just as much as understanding the demographical changes as anything else.

Oh and I picked up a few new bits of kit which I started using on my first day back on local appointments.

I’m not sure where Iíll go next year. But one thing’s for sure, whatever your chosen field or profession, taking a few days out to do something like this is time very well spent…